God is very interested in revealing Himself to the World and to us individually! Ps 19 says that Creation itself is God revealing Himself to us so much  so that it says that "the Heavens declare (reveal) the Glory of God". In Gen 3 God  revealed Himself to Adam & Eve by talking openly with them and giving them responsibility and a commandment. Sin broke this open revelation. When they sinned God spoke to them while they hid from His presence. He revealed to them a promise of the woman's "Seed" bruising the head of the Serpent!

Because Noah found grace in the eyes of God, He revealed to Noah His plan for the flood. Gen. 6
God revealed Himself to Abraham as Thy Shield and Exceeding Great Reward! Gen. 15:1
God revealed Himself to Moses in the wilderness in a burning bush and when ask what his Name is, introduced Himself as the I AM THAT I AM !  In Gen. 6:3 God told Moses that that He had revealed Himself to Issac and Jacob as God Almighty but by my Name Jehovah was I not known to them. On the Mount of Sinai God declared (revealed) His covenant unto Moses when He wrote the 10 commandments on two tables of stone. Deut.4:13
1Sam 3:21 God revealed Himself to Samuel by the Word of the Lord.
John the Baptist revealed to the people "Behold the Lamb of God which taketh away the Sin of the World" . St John 1:29
The Holy Ghost revealed to the Virgin Mary that she should conceive and bare Jesus "the Son of God" Luke 1:35
The Holy Ghost revealed to Simeon that he would not die until he saw "the Lord's Christ" Luke 2:26
St John 1:1 reveals to us that "In the beginning was the Word, and the Word was with God, and the Word was God. He revealed to us that the "Word was made Flesh and dwelt among us". St John 1:14
Jesus"s answer to Philip in St John 14, when Philip ask Him to shew him the Father was "He that hath seen Me hath seen the Father"
Paul says in Gal.1:15 that God called him "to reveal His Son in me"
Peter, when Jesus asked him who the Son of Man was made this declaration that Jesus was "Thou art the Christ the Son of the Living God" , Jesus then said "flesh and blood hath not revealed it unto thee but my Father which is in heaven".
The Hebrew writer says in 1;3 of Jesus that "Who being the Brightness of His Glory and the express Image of His person," reveals to us His Deity.
Christmas is all about REVELATION!! God is a progressive Revelator both in the span of time and on a individual experience. It is God"s utmost desire to reveal Himself to us through His Son Jesus the Christ! The Incarnation of God in the flesh is God"s greatest Gift to the World!
Christmas really comes to us the Day when Jesus Christ is revealed to us as Very God!! Is 9:6 He shall be called the "Everlasting Father" 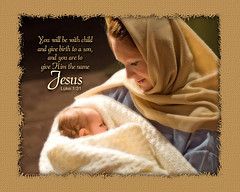 in His service,
Brother Leo Eby